Coins offer a fascinating insight into our history, and Oliver Yarwood picks his ten favourite lots from the Coins, Tokens & Banknotes Sale on 4th May and explains their historical context. 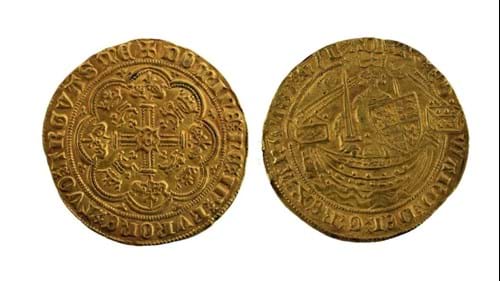 Edward was the first king of England to issue coins in gold as part of the national currency, copying the success of continental examples like the French écu which were freely traded in England despite the ongoing war with France. The totalising nature of the Hundred Years War is keenly illustrated in the design of this new coinage, which not only played upon the allegory of the Ship of State — presenting the king standing imperiously across his warship with sword in hand — but also drew upon the recent English victory at Sluys in 1340, where the French fleet was all but destroyed by a much smaller English navy. This example, a gold half noble equivalent in value to 40 silver pennies, was struck during the brief cessation of hostilities following the Treaty of Bretigni, where Edward renounced his claim to the throne of France. The coin reflects this tentative peace by dropping the word FRANC (a contraction of REX FRANCORUM meaning King of the Franks/French) from the coin’s legend and substituting in its place Edward’s less controversial claim to the Duchy of Aquitaine, appearing in the coin’s legend as the abbreviation ACT. 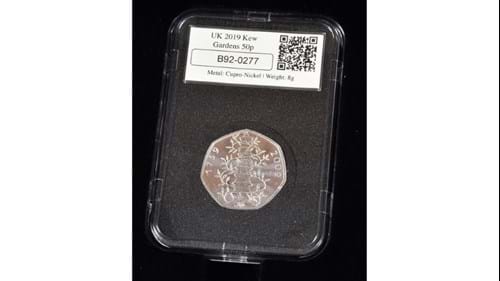 The ‘Kew Gardens’ 50p has gained household recognition as a collectable coin capable of commanding prices many times greater than its nominal face value. Everywhere across the country old ladies search their purses, cashiers check their tills in the vain hope of glimpsing the iconic design by Christopher Le Brun. Struck by the Royal Mint to commemorate the 250th anniversary of the foundation of the Royal Botanical Gardens, the reverse features the pagoda at Kew entangled by vines, accompanied with the dates 1759 and 2009. With a limited mint run of just over 200,000, obtaining an example of the Kew Gardens 50p soon became something of a holy grail to modern decimal coin collectors. We are lucky to be offering four examples for sale in our May Coins, Tokens and Banknotes auction, two in proof condition — each as part of a 2009 specimen set — and the other two graded Brilliant Uncirculated. 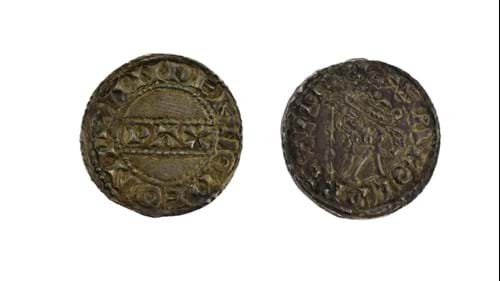 Harold II, more commonly known via his patronym as Harold Godwineson, was proclaimed king by England’s council of ealdormen (the Witan) following the death of Edward the Confessor in 1066. The disputed nature of his accession launched England into a devastating conflict with rival foreign claimants to the throne until William the Conqueror’s triumph at the battle of Hastings secured the future of the country as Norman. This silver penny minted during Harold’s short reign depicts the crowned head of the king facing left, holding a sceptre — both important symbols of Royal authority in Late Anglo-Saxon England. The reverse features the name of the moneyer who struck the coin, Anderbode, and the simple message PAX (peace), perhaps an unfortunate design considering the bloody nature of Harold’s reign. 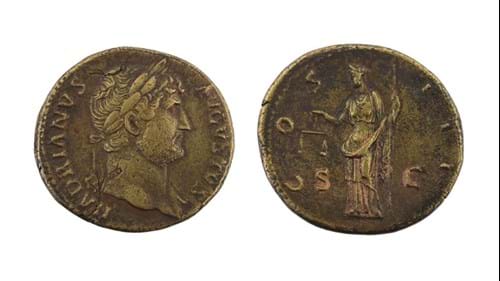 Hadrian is often remembered for the construction of the eponymous wall which divided the Roman province of Britannia from the wild lands to the North inhabited by the Picts and unconquered tribes, but he was also a keen administrator who used coins to promote his pietistic and artistic interests. The reverse of this sestertius depicts Aequitas, the Roman personification of fairness, holding a pair of scales in her right hand, and a sceptre in her left. This imagery may simply have represented a guarantee of the quality of the coinage and Hadrian’s command over the economy; however it is also possible to see the depiction of Aequitas as communicating Hadrian’s commitment to fairness and justice in a more general sense. Although the coin is undated, the inscription COS III gives us a clue that the coin was produced between AD119 – 138 when Hadrian was CONSUL TERTIUM, or Roman consul for the third time. 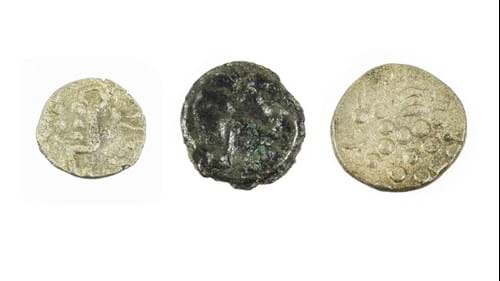 The production of coinage in Britain began towards the end of the 2nd century BC with the cast potin coinage of Kent. Before this, the Celtic tribes native to the British Isles imported their currency from continental Europe and were therefore heavily influenced by the designs of the Gallo-Belgic tribes. Following the Roman conquest of Gaul in 51BC, the coins produced in Britain in turn began to adopt features such as profile portraits and inscriptions common to Roman coinage. 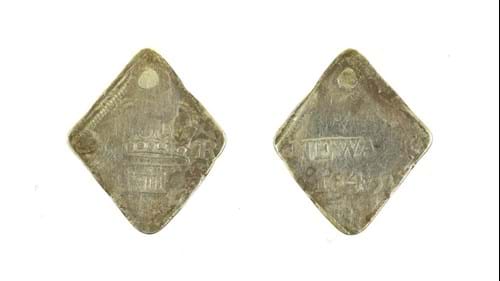 This lozenge shaped shilling shows how the ideals of coinage often had to adapt to meet the needs of necessity. Minted in 1645 during the last year of the First English Civil War, the coin was cut from items of silverware donated by the Royalists stationed at Newark-on-Trent to help stave off surrender to Parliamentarian forces. The coin was formerly pierced at 12 o’clock (now plugged) suggesting that it may have been worn at some time for decorative purposes. 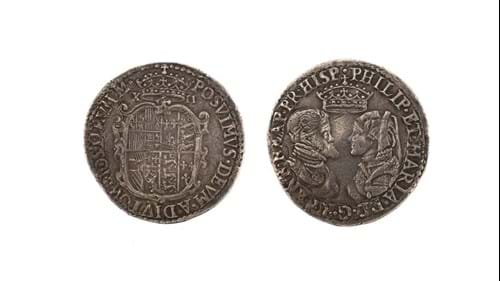 Influenced by the Spanish double ducat, this Philip & Mary face-to-face portrait shilling suggests an equality between the monarchs not reflected in Philip’s legal position as mere king consort at the court of England. 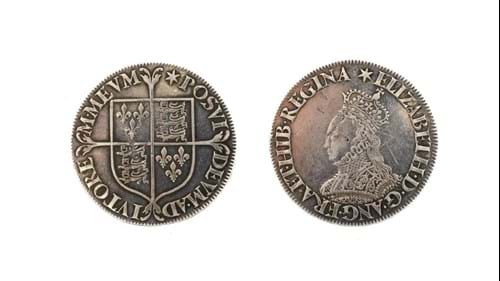 Since the first coins were struck in England, the minting process had relied upon human labour to produce coins by striking a piece of metal (the flan) that lay between two dies. As a result, these ‘hammered’ coins suffered from natural imperfections which gave them limited uniformity and therefore made them vulnerable to unscrupulous practices such as ‘clipping’, whereby the outside of the coin was cut away to decrease the precious metal content in the leftover coin. In the sixteenth century, advances in technology allowed coins to be minted with machines (milled coinage) creating currency that was better able to resist this unnatural process of debasement. Under Elizabeth I, the French moneyer Eloy Mestrelle was employed between 1560-1571 to produce the first machine-made coins in England which feature a left facing bust of the queen on the obverse, and the royal shield of arms quartered by a long cross fourchée on the reverse. 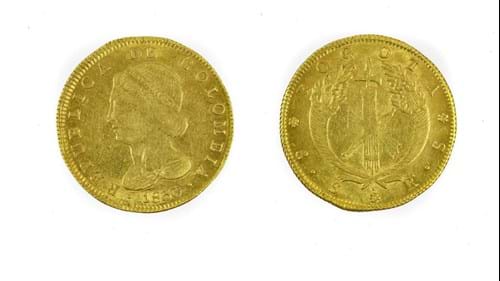 The Republic of Colombia, today known as Gran Colombia, was a short-lived state established following Simon Bolívar’s victory over the Spanish at New Grenada in 1819. Minted in 1830 at the death throes of the Republic, the 8 escudos weighs 26.96g of 21ct gold, emphasising the vast natural resources of South America which had made the Spanish Empire the most powerful European dynasty of the early modern era. 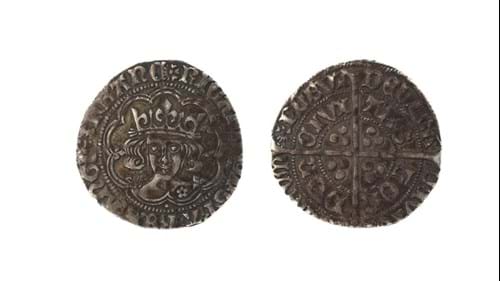 Richard III was immortalised in Shakespeare’s eponymous history play as the villain who ‘Deformed, unfinished, sent before my time Into this breathing world’, plotted the downfall of the innocent boy-king Edward V and his brother the Duke of York, whose mysterious disappearance in 1483 led to the accession of Richard as king of England. Richard’s prominence and relatively short reign make his coinage highly collectable. 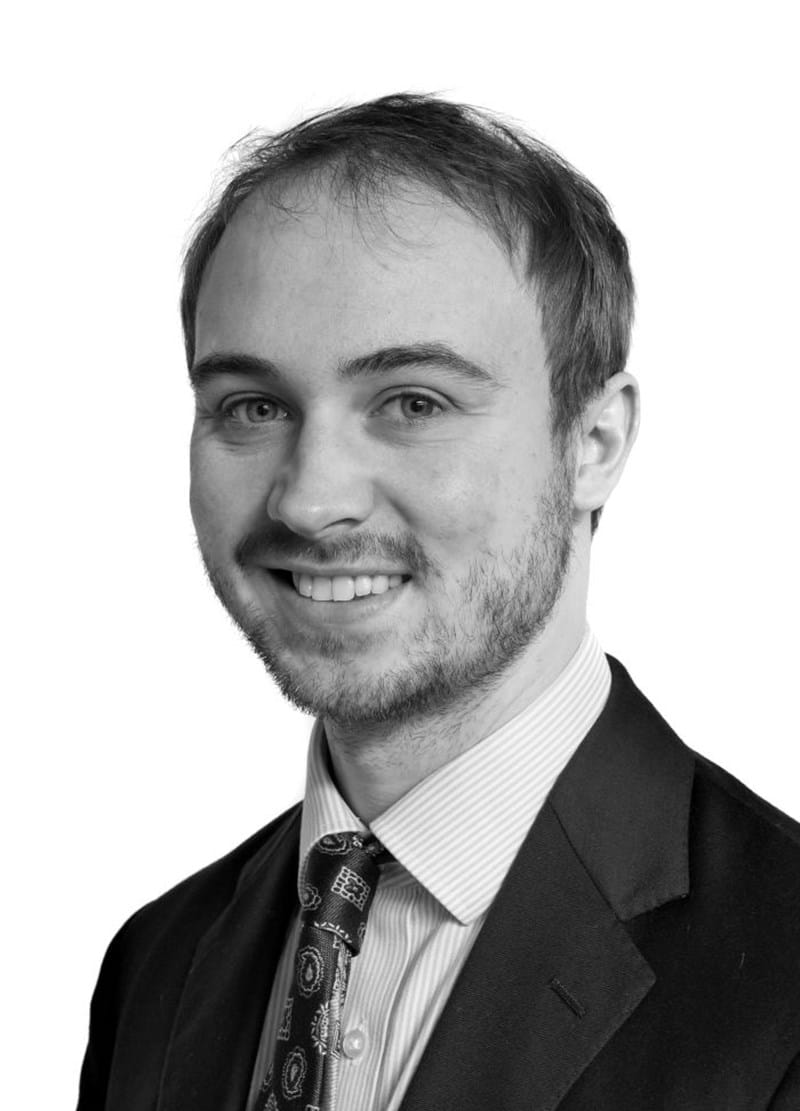