A Collection of Textile Designs for David Whitehead and Sons

A collection of more than twenty textile designs by renowned Modern Artists such as John Piper, Henry Moore, William Gear, Donald Hamilton Fraser, Peter Kinley, Marian Mahler, Pamela Kay and Louis le Brocquy are being sold in the Modern and Contemporary Art Sale on 29th February. Created for the Lancashire textiles manufacturer David Whitehead and Sons during the 1950s and 1960s, the designs come from the personal collection of the late George Butler, Head Designer for the mill. 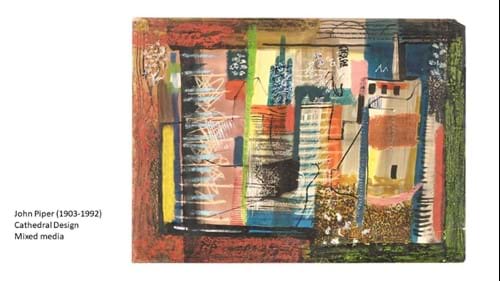 The Whitehead family first established themselves as spinners in the Rossendale Valley in 1815, when three brothers, David, Peter and Thomas Whitehead went into partnership as Thomas Whitehead and Brothers. In 1857, the sizeable business was dissolved and divided. David Whitehead took on Lower Mill and, taking his five sons as partners, established David Whitehead and Sons. The company continued to develop throughout the first half of the 20th century, and with modernised equipment and new printing techniques, came to the forefront of avant-garde textile design in Post War Britain.

Following the years of austerity caused by the Second World War, the British textile industry was much in need of reinvigoration. The large-scale development of new housing created a demand from a cross-section of society for colourful, modern fabrics to personalise their contemporary homes and celebrate an end to the sombre war years.

Recruiting artists to create textile designs was an effective way to improve pattern design and raise the profile of the industry. Preceding decades had seen successful artist/textile collaborations: William Morris sought to bring together Fine Art and handicrafts in the latter half of the 19th century; the Omega Workshops were established in 1913 by members of the Bloomsbury Group; Lyon silk-weavers Bianchini Férier commissioned designs by Raoul Dufy; and Edinburgh Weavers worked with the likes of Barbara Hepworth and Paul Nash.

In a brighter 'Modern Britain' that sought greater equality across the classes, artist-designed textiles made cutting-edge design accessible to all. Artists such as John Piper, Henry Moore and Edward Bawden sought to breakdown status distinctions between Fine Art and industrially produced objects, just as the Arts and Crafts movement had done a century earlier.

In 1953 the Institute of Contemporary Arts launched the ‘Painting into Textiles’ exhibition in association with The Ambassador Magazine, a textile trade journal owned by Hans and Elsbeth Juda that promoted British export. The exhibition was instrumental in the development of artist-led textile design. Hans Juda sought to inspire textile manufacturers to forge working collaborations with artists; the manufacturers would translate a freely created work of art into a functioning repeat design. Twenty-five artists were commissioned by Juda to produce artworks for the exhibition, six of which were purchased by David Whitehead and Sons. These included paintings by Henry Moore, William Scott and Donald Hamilton Fraser. 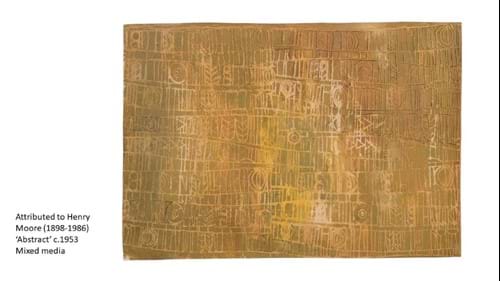 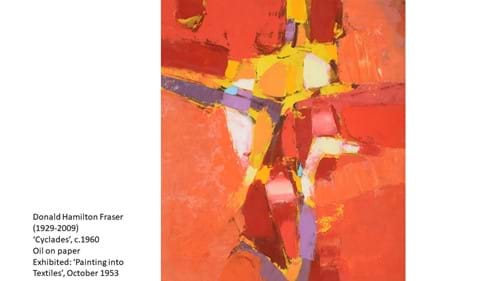 Whitehead’s most successful artist collaboration was the translation into textile designs of a group of works by John Piper, of which “Foliate Head” is the most well-known. Piper would design for the company until it’s closure in 1970. The working relationship between Piper and Head Designer George Butler is illustrated through several letters between the two, offered for sale with the present collection. Four original designs by Piper, including “Fawley”, “Venetian Palazzo” and “Piazza”, in addition to a fabric section of his famous painting “Abstract 1955” which was once owned by Hans and Elsbeth Juda, are also up for sale. These works demonstrate Piper’s extraordinary versatility as an artist and his openness to working with skilled craftsmen, printers and workshops to realise his ideas in fabric. 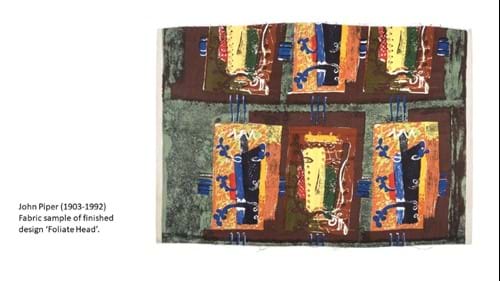 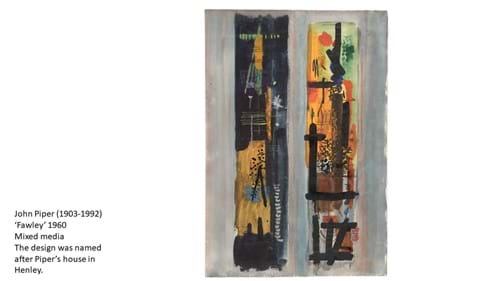 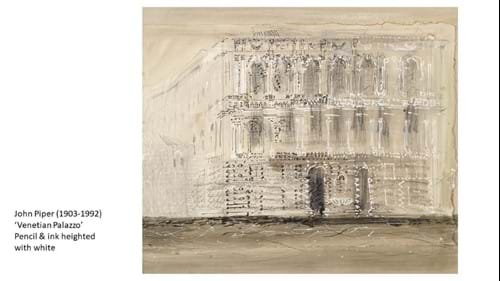 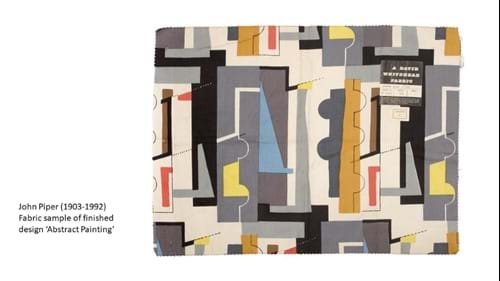 The textiles printed by David Whitehead and Sons were known for their high quality, modern design and affordability. In 1951, David Whitehead’s Contemporary Prints was launched, which were characterised by lively, small-scale designs printed on rayon. The Painting into Textiles scheme at David Whitehead and Sons was revived in the 1960s, in part due to the efforts of George Butler, during which time painterly effects characterised their output.  Clearly an advocate of the scheme, Mr Butler stated that “Whiteheads maintain that paintings can readily be interpreted on fabric without necessarily being designed for fabrics”. 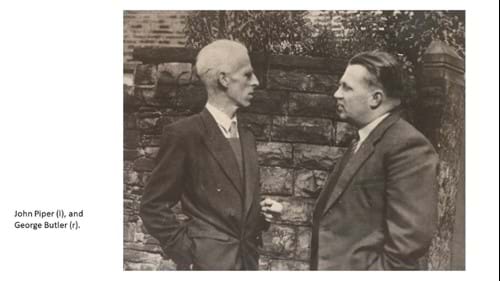 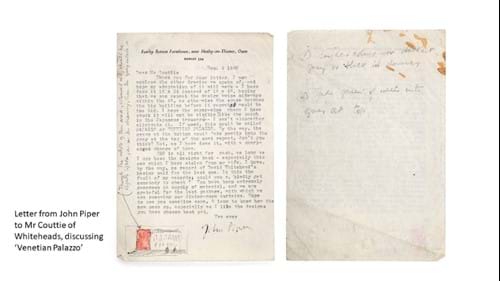 The collection is being sold by the descendants of George Butler. For further details, please contact Francesca Young on 01969 623780 or francesca.young@tennants-ltd.co.uk.