The Modern and Contemporary Art Sale, which is a timed online auction running from 29th July -6th August, will include the Reverend Dr Richard Davey Collection.

Richard Davey is an Anglican Chaplain and Senior Research Fellow in the School of Art and Design at Nottingham Trent University. His research focuses on the depiction of faith in art; how the intangible is embodied in a physical object, and how spirituality is conveyed by the artist. Davey has written numerous publications on contemporary religious art and Modern British Art, including editing Royal Academy Summer Exhibition catalogues on several occasions and writing books on Anselm Kiefer and Anthony Wishaw published by the Royal Academy of Art.

Below are Rev. Dr Davey's recollections of a lifetime collecting:

“I first started collecting art when I was about 22. I was living in East Sussex and working for the Education authority’s Art and Museum Service, where my colleagues included a number of art teachers. My first degree had been in Medieval Studies and although I had specialised in History of Art and knew I wanted to further research in that area, this was the first time I had spent time with actual artists talking about their work. There was a gallery in Eastbourne at the time that I would visit all the time run by an Italian painter who was a good friend of John Bratby, who lived nearby. Through him I started to get a few modern British paintings and began to think of myself as a collector, going round galleries and antique shops in Brighton and Hastings looking for bargains. It was at this time I acquired the John Skelton, when he was asked to make some studies for a new reredos for the Church of St Andrew’s, Alfriston, the so-called Cathedral of the South Downs.

After my ordination as a Church of England Priest, I began a part-time PhD looking at medieval art and theology. But I then contacted a couple of contemporary artists whose work I had seen in a journal of church building. There was a medieval quality to their work which fascinated me, and I arranged to visit their studios. And that is where it really started. I quickly changed the subject of my research and began looking at contemporary sacred art. I spent all my spare time visiting artists’ studios, writing reviews on contemporary artists for the Church Times, and after getting a job as Chaplain at St Edmundsbury Cathedral, Bury St Edmunds, putting on exhibitions in the Cathedral, including a major exhibition for the Millennium, in which I displayed 13 newly commissioned Stations of the Cross around 13 Suffolk churches. 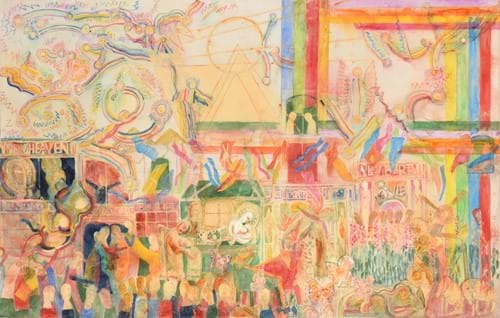 One of these artists was Norman Adams, who I had met in the mid 1990’s. I quickly became a good friend of Norman and his wife Anna. I would go and visit their tiny house in Chiswick, look at paintings and talk about his work. It was at this time I managed to acquire this wonderful watercolour. Although Norman is famous for the Stations of the Cross he made for the church of the Hidden Gem in Manchester, the watercolour set he created for me was incredibly special and reflected his fluency and magic with watercolours. 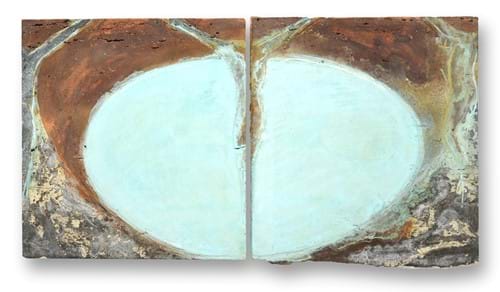 Stephen Cox (b.1946), "Crucifixion V", Signed, titled and dated (19)86 on the reverse of one part, two parts of travertine marble with black cement and oxides, from series of St Pauls at Haringey, 89cm by 91cm overall

I would also visit Stephen Cox in his large studio in Kent, and whilst I had managed to get a wonderful watercolour by him of a series of heads of St Paul, when this sculpture came up, I couldn’t resist it. It was on a trip to New York that I was lucky enough to meet Francis Newton Souza. We had a memorable lunch in a New York diner and having known and loved the emotional intensity and rawness of his crucifixion painting in the Tate, I was thrilled when I had the opportunity to get this drawing from my friend Jane England.

During my training for the Church I had spent a memorable summer on placement at Coventry Cathedral, and having spent many hours looking at and being mesmerised by Graham Sutherland’s stunning Christ in Majesty Tapestry, I desperately wanted to have something by Sutherland, but never thought I would be able to, until this drawing came up at auction and I managed to acquire it, at a price I could just about afford. 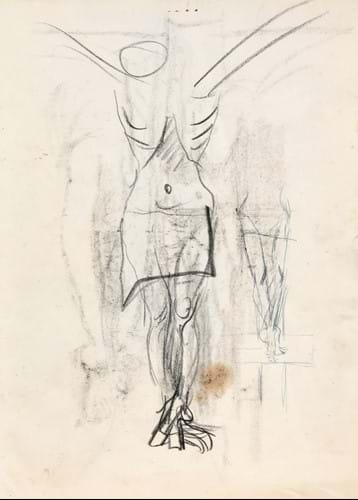 I remember the day I visited Michael Finn in his stunning house on the North Cornwall coast. He was an artist I had wanted to talk to for my PhD research, and I made the long pilgrimage to St Just from Bury St Edmunds in a day. Michael was famous for these cross constructions and I was thrilled when he let me have this one, along with the wonderful abstract painting. Sadly, he died before I was able to go back to carry on the conversation. 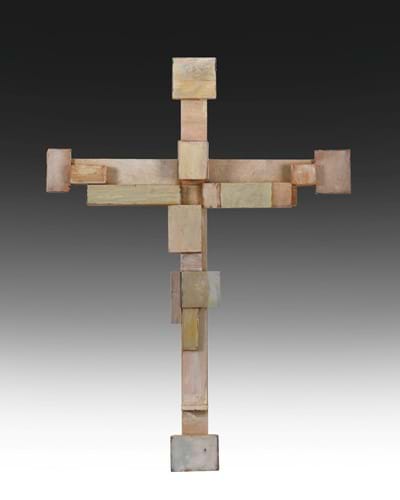 In 2004 I curated an exhibition for the Nottingham Castle Museum and Art Gallery called ‘Faith’, which included Peter Howson, who I had met on a couple of occasions. I already had a little drawing by him, but then I saw this drawing and being an Opera lover immediately recognised it as one of the studies for his set designs for the Scottish Opera production of Mozart’s Don Giovanni. 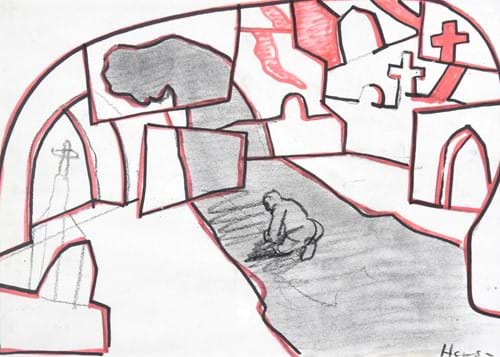 Over the years my collection has grown and now has several hundred items in it. Many have these been gifts from the artists, payments for writing, works bought at cost from the studio, or works bought from auction of artists I knew, or who I would have sought to have known if they had still been alive. In September 2019 I moved into a smaller house and realised that I would never be able to display all my collection or even a fraction of it, and rather than storing it I decided I wanted others to be able to have the chance to own some of these works which have given me such pleasure, partly as they are memories of the very special people I have met and known through my career as a writer and researcher on contemporary art. The selection was relatively easy. I knew I would find it difficult, if not impossible, to let any of these works go, as I would take one look at them and fall in love with them all over again, so I have offered up the works I know my wife would never give house room to!”