Understanding the Value of Modern Currency

At auction, the value of any coin, token or banknote relies on three main criteria:

Pre-decimal coins, with a few exceptions, were minted in their millions and many survive in excellent condition. Thus, they have little numismatic value unless, in the case of copper coins, they were minted pre-1900 or in the Victorian era. However, condition is still a consideration; for example, a worn ‘Bun Penny’ will still have little value unless it is one of the very few rare dates.

Silver coins minted in 1919 and earlier were made of 92.5% silver (925 sterling), which means that even if they do not have a collectable value, again except for those with rare dates or in excellent condition, they have a bullion value. Silver coins from 1920 to 1946 contain 50% silver, however, from 1947 onwards ‘silver’ coins have been made with cupronickel and as such have no real value, generating around £30 for a 10-kilo bag of scrap.

Gold Sovereign and Half Sovereigns

Unless dating from Young Head/Shield Back Victorian era or earlier and a small number of rarer coins, sovereigns and half sovereigns have a fixed price determined by the current price of gold. However, the price of gold fluctuates on an hourly basis, so a current valuation is important if you are thinking of selling. There is a premium for boxed proof coins with certificates of authenticity, which can command higher prices.

In recent years, the Royal Mint has seen itself put under considerable pressure to produce ‘commemorative’ type coins, rather than the older style single design type. Coupled with cutbacks particularly in quality control, this has seen considerably more of these ‘error’ types enter into circulation.

There has been much hype driven by the press and eBay as to the expectation of high values for these ‘commemorative’ and ‘error’ coins, coupled with numerous copies coming in from China and elsewhere. Such coins were minted in their millions and are simply not as scarce as people think.

As a curiosity and to a ‘commemorative’ collector the currency base metal version may achieve a little above face value, but only on eBay. Some coins are listed with extraordinarily high asking prices, but these will never actually sell (see below). Modern ‘error’ coins listed on eBay generally only achieve £10-20 at most, despite some listed at inflated high prices. Two genuine exceptions are the 2009 Kew Gardens 50p, which had a low mintage of 210,00 and regularly sell for £60-120 at auction, and the 2012 ‘hidden swimmer’ (the left-hand coin below). Issued to commemorate the London Olympics, the ‘hidden swimmer’ version of the aquatics 50p was withdrawn and might achieve £500 - £800, except for one example found early on that achieved £3,000. It is estimated that at least 600 of these coins failed to be returned to the mint. 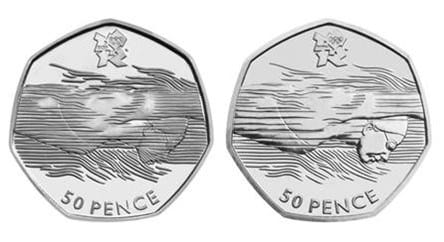 Another example of a rare error, which can command a few hundred pounds, are sample 2p coins from 1983. These were accidentally released, having been made and with an old die dating from the introduction of decimalisation and which had the word ‘New’ included in the design.

Many think variations of 50p and £2 coins have a collectable value, partly due to hype on eBay and in the press. Whilst those looking to complete a set may pay a pound or two above face value, for genuine numismatists they were made to be used and are simply for spending.

There is much misinformation about the rarity of error and commemorative coins online, and even deliberate misleading by criminals and con artists. Indeed, many of the supposed errors are not errors at all, but variations due to minting techniques. For example, the ‘upside down’ edge wording, examples of which are in fact equally balanced with numbers of ‘right side up’ coins due to the random way in which the coin ‘falls’ into the edge press. Edge lettering was introduced to help prevent counterfeiting and is applied before the rest of the coin has been struck. 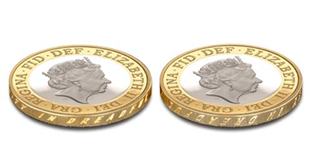 Seeding: You will sometimes see coins for sale online at very high prices, sometimes for £3,000, £5,000 or even £7,000 or more. This is called ‘seeding’ where a con artist lists a currency coin for a lot of money hoping people will see it. Shortly after they will then list further coins at perhaps £30 to £300 hoping people who have seen the vastly inflated listing then buy it thinking they have found a bargain. Online public listing auctions say that this is not illegal, as sellers are entitled to charge what they like for their goods.

Tennants do not deal in circulating base metal currency and commemorative coins unless you have one that is a genuine error. The only decimal commemorative-type coins accepted for auction are the proof silver, gold and platinum varieties that appeal to academic collectors and investors and that have a bullion value.

If you think that you have a genuine error, you should first contact the Royal Mint Museum. They operate a free conformation service and will return your coin with a letter. This letter gives your coin an excellent provenance and will provide buyers with confidence when you place it in auction. The Royal Mint can be contacted here: https://www.royalmintmuseum.org.uk/quick-links/contact-us/